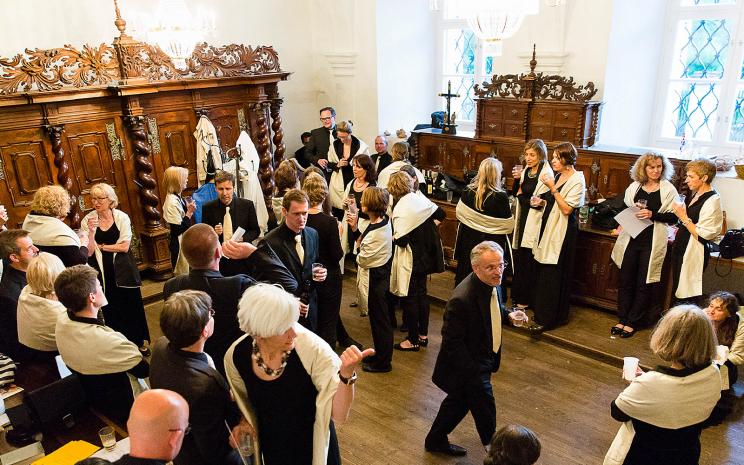 For three choirs and twelve sub-conductors

A host of voices from Graz probe the voice as a manipulative instrument. The premiere of Peter Jakober’s composition features three choirs and a total of twelve conductors, among others.

Creating an eternal light at the beginning of a festival history can probably only be a symbolic undertaking verging on the foolhardy: the first iteration of the musikprotokoll festival at steirischer herbst in 1968 opened with György Ligeti’s as yet young sixteen-voice motet “Lux Aeterna”.

The fascination of the voice as an instrument remains both timeless and contemporary in 2017. Three Graz-based choirs, conductor Gerd Kenda, no fewer than twelve sub-conductors, four instrumentalists and a writer open this year’s musikprotokoll with a space-filling premiere of composer Peter Jakober. The conductors each conduct different tempi, with this overlap creating a very special acoustic experience. Author Ferdinand Schmatz recites his own text, the Graz-based ensemble zeitfluss sets the instrumental tone, and the varied voices of chor pro musica Graz, Vocalforum Graz and Domkantorei Graz unashamedly venture an overt manipulation of their listeners.

After all, “Primen” deals with phenomena that define our being, whether we admit it or not: with the manipulation of the word and the contingent manipulation of human beings, the delicate boundaries between the conscious and the unconscious. Between the sense and sensuality of language and voice there lies a thin line, and yet a wide sphere.