One day it will have been a steirischer herbst, back then in the future, whose theme was “Back to the Future”, with Marty McFly as its heraldic emblem. “Shit”, says Marty McFly, getting out of the 1981 DeLorean on the Murinsel. “What the f*** is this?”, Doc wonders. “We set our destination to October 2015. Although, come to think of it, this thing we’ve landed on is rather strange. An artificial island?” “A futuristic signalling station?”, surmises Marty McFly. “Look! There’s a sign, a poster! A paper one, like in the old days! But that’s strange: http://musikprotokoll.orf.at ... a kind of laboratory ... current trends ... field recordings.” “What?” Doc is appalled again. “Field recordings? That was already boring in 1985!” Marty McFly carries on reading undeterred. “Sound art ... RSO Vienna ... Christian Fennesz ... Science, Research and the Arts ... Internet ... what kind of net’s that? And nixie? Has that got something to do with this floating island here?” Doc is puzzled too: “And what is this combination of letters supposed to mean: O.R.F.? What does that stand for?” “Maybe it’s for O.ld R.adio F.unction?”, McFly quips. Finally, Doc feels a certain confidence. “Some of this stuff sounds really strange. At any rate, people here seem to be occupied with things that have something to do with the future. Perhaps we’re not in the wrong place after all. Perhaps this is really a crazy laboratory. Four days of experimentation. Let’s wait and see. Let’s get back to the future!”

[The director’s cut of this film script is being published in the musikprotokoll magazine in summer 2015.]
Preface: Elke Tschaikner 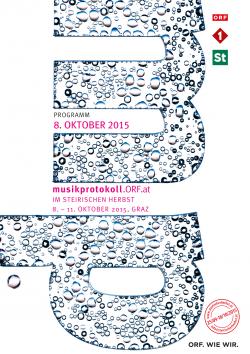