The musikprotokoll laboratory is opening its doors for the forty-seventh time. Artists, musicians, composers and experimenters from across the globe are coming to Graz to share the current results of their work: Klangforum Wien, the Vienna Radio Symphony Orchestra, the Arditti Quartet, Radian & The Necks, Andrey Kiritchenko, Klaus Lang and many more.

“Don’t exploit the past without feeding the future”, was opera director David Pountney’s comment on the online petition rettetdasmusikprotokoll.mur.at. The festival sets out to tackle this task every year anew. The fact that Austria can refer to itself as a nation of music today is thanks not only to this country’s wonderful history of music, but equally has a great deal to do with those contemporaries who so uncompromisingly push the envelope of their art.

These artists must have the opportunity to showcase their works to a national and international audience: at festivals willing to take the risk of the unheard and in front of an audience willing to join them on their journey, to be surprised, touched or challenged by new music. After all, premieres can sometimes go amiss. Or the opposite. musikprotokoll has been taking this risk since 1968. At the same time, this festival was and is in danger – budgets have been axed, its right to exist called into question. But what no-one can take away from us is the conviction that festivals such as musikprotokoll will be needed for at least another 47,000 years to come. Because the future needs nourishment. 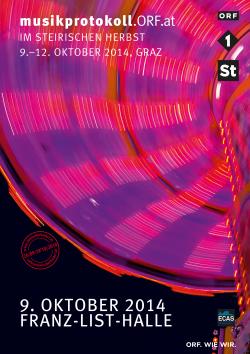