Graz as one of the “European Cities of Advanced Sound” (ECAS for short): That’s the name of a project that will be leaving its first marks at the Numusic Festival in Norway’s Stavanger and in Graz this autumn. In an exchange with international festivals such as the Berlin Club Transmediale and Futuresonic in Manchester, a musical kaleidoskope will evolve over the next few years ranging between improvisation, electronica and composition.

In addition to major concerts, chamber music, and numerous other musical items, a new musikprotokoll programme also kicks off this year: “... as seen from the middle of east ...” presents co-operations with artists from i.a. Lebanon, Jordan, Israel and Palestine. 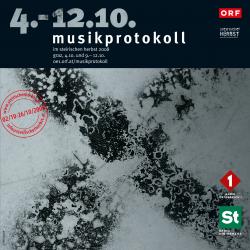