When pianos start to talk and electric guitars feel dislocated, when genetic records are translated into music and Brahms turns up on a Kalitzkean isle of the dead, then ”Übertragung – transfer/ence” is the theme of the musikprotokoll at steirischer herbst. Our everyday life is characterised by transference mechanisms and transfers, from cash transfers, attempts at zero-loss power transmission, to cultural crossover in every conceivable form, commercial and artistic. This year, musikprotokoll showcases a number of artistic, compositional interventions on the subject of transfer/ence; a book of culture theory writings on the subject will be published, while several artistic, theoretical contributions will be based on local co-operations: with Medienturm Graz, tonto, Open Music, IEM Graz, ORF-Kunstradio, Kunsthaus Graz, Medienkunstlabor, OS04 and, last but not least, steirischer herbst. According to Sigmund Freud’s conception, transference is so intimately linked to what is transferred, the content, the semantic, what is stored, that the latter ultimately triggers transference. In contrast, what is transferred, as content, no longer even features in Claude Shannon’s tradition of mathematics and information technology, and transfer/ence is simply an arithmetical operation for transferring whatever. In view of all this transfer/ence, storage does not feature in this conceptual tradition, and because our cultural understanding of art is founded precisely on alternating relations between what is to be passed on and what is to be invented, as repetition, as difference, the artistic, compositional strategies in this musikprotokoll operate in this conceptual field of tension. 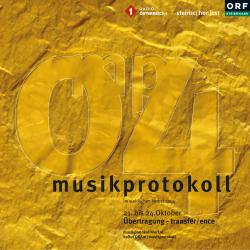