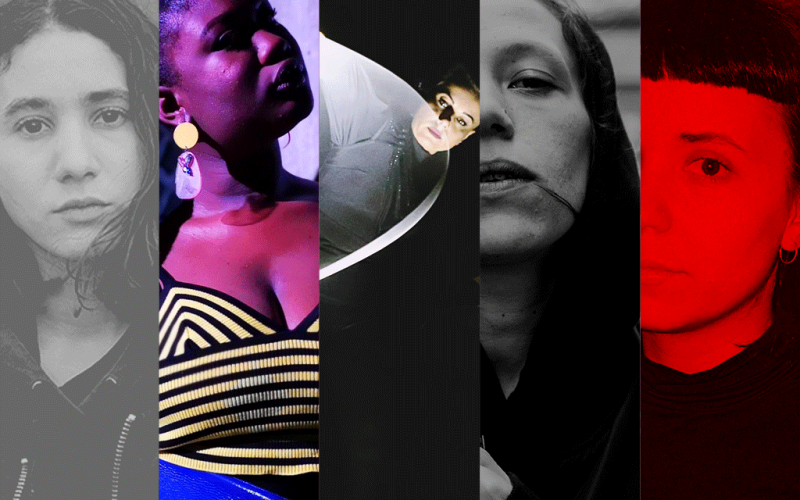 The Creative Europe-supported SHAPE platform for innovative music and audiovisual art is announcing its 2019 list of artists. The artist selection for the platform’s fifth year traditionally places a number of audiovisual projects and sound artists alongside musical acts that range from post-grime and techno to free improvisation and acousmatic music. SHAPE is also happy to say that its 2019 roster is created with a 50:50 gender balance.

A 7-year initiative co-funded by the Creative Europe programme of the European Union, the SHAPE project reunites 16 European non-profit organizations active within the ICAS – International Cities of Advanced Sound network to create a platform that aims to support, promote, and exchange innovative and aspiring emergent musicians and interdisciplinary artists with an interest in sound. SHAPE stands for “Sound, Heterogeneous Art and Performance in Europe”. SHAPE annually chooses 48 musicians and artists to participate in a mix of live performances, residencies, workshops and talks across member festivals and special events.

Each year, the curatorial teams of all 16 SHAPE festivals and initiatives come together and choose 48 artists. The artist roster has been created disregarding divisions of genre, age or popularity. Rather, creative novelty and successful experimentation have served as core values, with additional emphasis on the inclusion of upcoming and underexposed artists as well as representing local scenes of involved festivals and art centers.

As the “Creative Europe” has prolonged SHAPE for a second phase (until 2021), the platform also gained a chance to introduce some new elements, including the artist presentations and the educational events.

As of 2018, SHAPE’s artistic presentations will have a wider geographical reach – in addition to the SHAPE member festivals in 16 cities and 12 countries (see full list at the end of this document), associate partner events will be picked by each festival individually, covering European countries that are not represented among the 16 core member festivals. Each SHAPE festival will present at least one artist or musician at its associate partner event, thus solidifying a wider network within European adventurous music events and increasing the number of SHAPE showcases per year. In 2019, this dimension of SHAPE’s activities will aim at further geographic diversity.

The structure of SHAPE’s educational events has changed as well – two open educational events will be organized for attendants of each SHAPE festival, while the educational activities for SHAPE artists have become centralized; one multi-part joint event will be organized annually to bring together all SHAPE artists of the respective year. In addition to engaging them with topical workshops or lectures, these occasions will serve as opportunities for them to network, exchange ideas and initiate collaborations.

The fifth year’s roster of SHAPE continues to demonstrate a kind of eclecticism that is clearly an outcome of all the 16 diverse festivals selecting artists and projects together – You may find French industrial techno DJ and Rinse FM host AZF sharing the stage with Portuguese electro-acoustic music composer Jonathan Uliel Saldanha or Latvian “cosmic analog synthesizer music” artist Marta SmiLga brushing shoulders with audiovisual artist and creator of participatory installations Sally Golding or artist Michela Pelusio, whose work has been described as “quantum physics meets audiovisual experimentation”.

A deliberate desire to detect streams of fresh ideas and unexpected influences beyond genre categories has influenced the choices of SHAPE’s curators. Interesting musical collisions and fusions are encouraged: Hungarian drummer Balázs Pándi is experienced in anything between dub, breakcore, free improvisation, noise, grindcore and jazz, whereas Swedish electronic music composer Maria W. Horn is oscillating between minimalist structures and piercing power electronics utilizing both digital and analog synthesis as well as acoustic instruments, and Perrine en Morceaux blends French pop music with electro-acoustic practices and other elements from the world of avant-garde music. Cellist Lucy Railton uses her experience as performer of post-war avant-garde music, including works of Xenakis, to create her own kind of electro-acoustic, minimalistic but diverse music. Similarly, the trio Plug, led by Nicolas Crosse, bassist of Ensemble Intercontemporain, melds the members’ knowledge of contemporary classical music with influences from rock music, drone and experimental electronics. French bagpipe player Erwan Keravec not only lends his talent as an instrumentalist to performances of works by contemporary composers, but is also one of the very few players of this instrument in the field of radical free improvisation.

Improvisation is a key concept also in the music of guitarist Nina Garcia, who, with her noise rock oriented solo project Mariachi explores the limits of her instrument, or Katharina Ernst, a multidisciplinary artist and drummer, experienced in the vital free improvisation scene of Vienna, who works more in a rhythm-based and electro- acoustic mode within her solo project “Extrametric”, based on drum exercises requiring deep concentration to propel separated elements forward into richly patterned grooves. Kikimore, a group of six female researchers of sound and analogue electronics, is held together not only by their interest in improvising with electronic instruments, but, in their own words, also “raw sound, noise and the smell of solder”.

Projects, such as Bear Bones Lay Low a.k.a. Ernesto González, born in Venezuela and residing in Belgium, or WIDT, a duo of sisters Antonina Nowacka and Bogumiła Piotrowska from Poland, demonstrate an interest in highly psychedelic musical – in the latter case, also visual – experiences. WIDT participate in SHAPE with a new collaboration – they will be joined onstage by Christoph de Babalon, an acclaimed German DJ and producer whose late 90s album “If You’re Into It, I’m Out of It” is counted among the classics of experimental club records of that period.

Classic labels of experimental electronic music are also represented by minimalist Robert Curgenven, who is best known for his works on LINE, and patten, the genre-swapping project, signed to Warp Records, also known for immersive audiovisual shows.

Continuing the path started in 2017, the new artist list of SHAPE puts a large emphasis also on seeking out interesting DJs – this year SHAPE welcomes Spanish- born and Brussels-based DJ Clara!, known for her innovative investigations into the reggaeton genre, Crystallmess, whose mixes may oscillate between, for instance, dreamy ambient parts and subtle but surprising shifts to French rap, and Sentimental Rave – a self-taught DJ, producer and photographer, whose sets are based in her equal love of rave, gabber and experimental music.

Check the full list of artists at the end of this article to preview their works, and don't forget to keep visiting our homepage - we'll be introducing all SHAPE artists with interviews in our "Artist of the week" section!

First activities of the fifth year

For SHAPE, the fourth year formally starts in December, and the platform will kick it off with artistic presentations and public talks at Berlin’s CTM 2019 – Persistence (25 January – 3 February). The first confirmed SHAPE acts of this event are Lucy Railton, Erwan Keravec, AZF, Sentimental Rave and Machine Woman and Sarah Farina – alumnas of SHAPE 2017 and 2018 respectively. More will be announced soon.

One can also expect a large SHAPE showcase outside of Europe in the tradition of SHAPE’s previous activities at Canada’s MUTEK, Brazil’s Novas Frequências or Uganda’s Nyege Nyege. More info will be announced soon.