From the beginning, musikprotokoll has been inseparably linked to steirischer herbst, hitting and documenting the tone of the time year in, year out: between grand orchestra and open-source based computer network, this year again it is presenting the wide diversity of modern music, its sounds, its media and tools, but also its possibilities and intentions - solidarity, sensitivity and knowledge. What do we expect of art and music today? Leadership? Autonomy? A magic retreat or a sky falling on our heads, as in Georg Nussbaumer's opening work for steirischer herbst?

With a focus on installation-based and performance-based approaches in music, musikprotokoll runs like a red thread through the entire festival this year, confronting the audience, artists and itself with different forms of expression, media and topics. 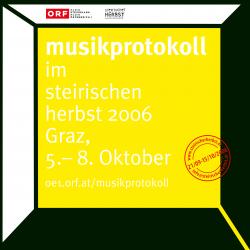