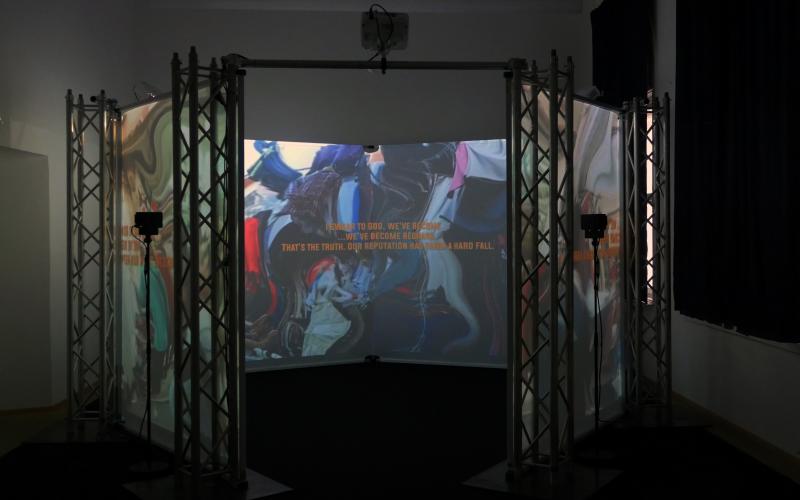 We are looking forward to the 51st edition of the festival "musikprotokoll im steirischen herbst", which will take place this year from 4 to 7 October! - As an overture to musikprotokoll 2018, we will be presenting The Magma, a 360-degree video installation by Egyptian artist ZULI, for the first time in Austria starting September 22.

Magma is the viscous mass of rock which is found in the Earth’s mantle and crust but never reaches its surface, forever confined to invisible depths. To Ahmed El Ghazoly a.k.a. ZULI magma stands for the inhabitants of Cairo who, “post 2011,” seem to have no choice but to incessantly bemoan their miserable circumstances. For his audiovisual installation The Magma, the artist has captured their laments and embedded them in music. Visitors entering the 360-degree video installation instantly feel transported to the Egyptian megacity of Cairo. Straight away, with no time to acclimatize, they are swept away by the hustle and bustle of life brimming with activity. Struggling to keep their balance on the thin line between dream and nightmare they accompany ZULI as he roams the city, right into the throng of street vendors, each of them clamorously struggling to earn a livelihood. Next, they follow the artist into the cars of taxi drivers despairing at the never- ending traffic chaos, into subway cars packed with people and narrow streets covered in garbage. The Magma is the winning project of the CTM Radio Lab 2018 which, in keeping with the CTM festival theme of Turmoil, set out to capture the sound of internal and external crises.

Elke Tschaikner, Susanna Niedermayr, Christian Scheib and Fränk Zimmer are looking forward to an exciting festival on behalf of the musikprokoll team.