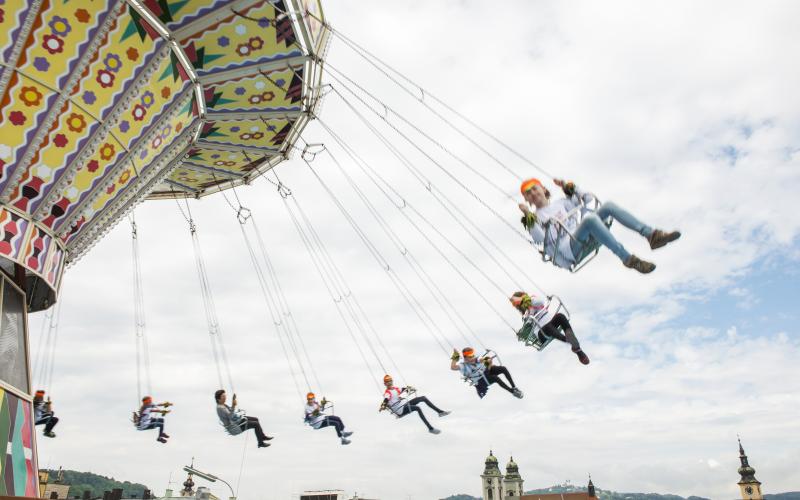 Musical Swing Carousel for Bodies in Motion at isa19 – “Just Play!?” The swing carousel project “Let’s merry-go-round!” is paying a visit to isa19, this year’s International Summer Academy of the mdw – University of Music and Performing Arts Vienna. Though it may look like the kind of merry-go-round one knows from the amusement park at Vienna’s Prater, it has a special secret: every year takes it into a new acoustic present that opens up a hitherto unknown sonic world. Only those who let their bodies swing round and round will hear, feel, and experience the music composed for this carousel and tested by means of a computer simulation while flying through the air.

International artists, isa19 course participants, and students of the mdw have conceived sound compositions for this carousel—and as part of isa19 and its isaOutreach course, they invite the public to float along and listen to, enjoy, and reflect upon this music as a group, thereafter allowing it to influence their own creative action.

So come closer, hop on! From 17 to 24 August 2019, this carousel will be set up and offering free rides at Schloss Reichenau—right at the centre of this community at the foot of the Rax.

An event of the 29th isa – International Summer Academy of the mdw – University of Music and Performing Arts Vienna in cooperation with national broadcaster ORF’s festival platform for contemporary and experimental music “musikprotokoll im steirischen herbst”.