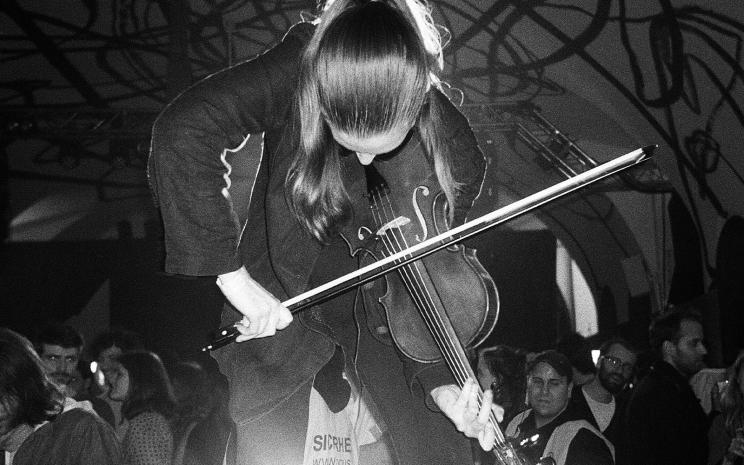 What Beatrix Curran aka Battle-ax finds so fascinating about the viola is its rich, dark sound, which she likes to manipulate to sound an octave lower using an effect pedal. Born in Australia, she came to Vienna on an exchange programme in 2009 to study visual arts, at which time she discovered the world of new music and experimental electronic club music. The latter she humorously described as the Fourth Viennese School in the text and photo series she presented in an exhibition as part of the 2015 Klangspuren festival in Schwaz. In May, at the opening of the Wiener Festwochen’s first edition of the Hyperreality festival Battle-ax performed for the first time with Stefan Juster aka Jung An Tagen, who last year attracted much attention with his album "Das Fest der Reichen", released on the influential Editions Mego label. For the Zeit-Ton extended programme on October 1 to celebrate the double fiftieth anniversary of radio Ö1 and the musikprotokoll festival Battle-ax and Jung An Tagen will continue their collaboration and present a piece which was specially created for this event. “I really appreciate the retroflex within his music,” Battle-ax says about Jung An Tagen, “that it can be received on some sort of higher cognitive plane and then all of a sudden you want to start moving and it becomes very physical. It’s both stable and erratic, instant. This is where I think we meet. There’s a lot of immediacy in both our projects despite having a very different method of production.”

Registration: You will need an audioplayer/headphones. Please reserve your slot as of Sun 10/09 at http://musikprotokoll.ORF.at/homages The starting point is designforum Steiermark.