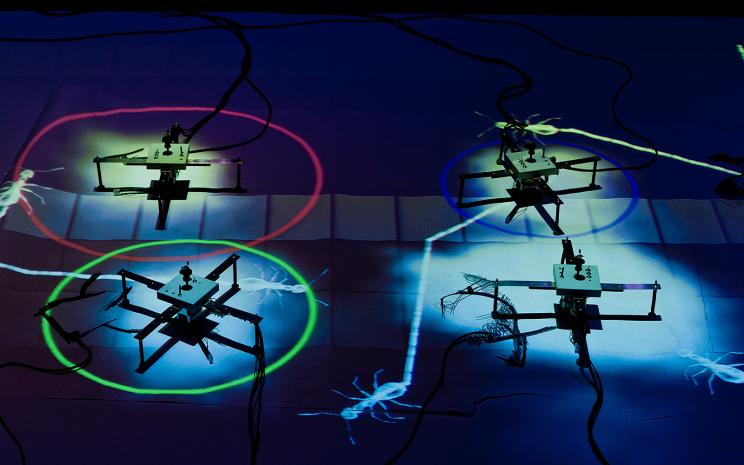 Swedish sound artist Daniel Skoglund collaborates with British audiovisual artist Kathy Hinde. Skoglund constructs systems and machines to explore abstractions inspired by everyday observations. Hinde draws inspiration from behaviours and phenomena found in nature to create generative works which combine artificial intelligences with human-animal intuition. Through this collaboration, they combine their joint fascination with chance procedures and open-ended processes. Just as living beings are capable of long-term adaptation to their environment, their “open scores” shape the behaviour and evolution of their music and art. In Palimpsest, Hinde and Skoglund use a canvas spread out on the floor to create live drawings. They use mechanical graphite sequencers to create feedback loops that turn the drawings into sound. Simultaneously, the resulting sound pulses are used to manipulate the video footage. Layers of drawings, sounds and projections overlap, into an evolving ‘Palimpsest’, which is the term used to describe a manuscript on which the original writing has been effaced to make room for later writing but of which traces remain. The audiovisual process guides the act of drawing and vice versa, creating a feedback loop that allows visitors to experience a performance which gradually blurs the boundaries between actual drawing, video projection, and music. In addition, esc medien kunst labor is organizing a workshop and presenting installation works by Kathy Hinde during and after musikprotokoll.

A production of esc medien kunst labor and ORF musikprotokoll. Palimpsest was commissioned by WELD and EMS, Stockholm, 2010. In cooperation  with SHAPE – Sound, Heterogeneous Art and Performance in Europe. Sponsored by the European Union’s “Creative Europe”. Kathy Hinde is SHAPE Artist 2018.

Information and workshop registration at: musikprotokoll.orf.at/turn-drawings-into-sound