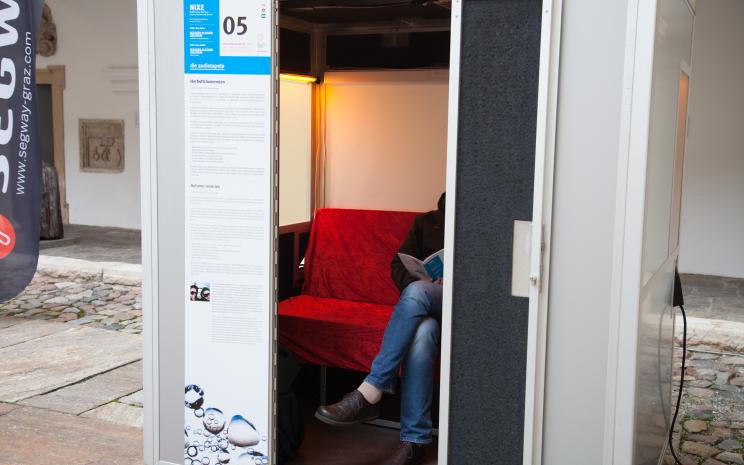 "... when a scientific approach becomes the starting point for art ..."

"On the road" is "on the sea." Mythologically, this probably applies to no one better than Odysseus. In the Mediterranean. Or, perhaps, rather, Aeneas. Carthage and Italy. But why digress into mythology. Exactly one hundred years ago, after a thoroughly successful life, someone who had also sailed the Mediterranean died. But not heroically looking for home or a new homeland, but passionately and at the same time with stupendous logistics and that over decades Ludwig Salvator cruised the Mediterranean with a whole crew of scientists and companions. As a naturalist and ethnographer, he explored, visited, mapped, and described places in the Mediterranean from the 1970s until the end of his life in 1915. Not only of the Mediterranean, but these most fondly and consistently. And preferably islands, which hardly anyone knew in his time. There, Archduke Ludwig Salvator can direct his mania for observation and passion for description to natural and social systems comparatively untouched by the industrialization of the 19th century.

Ludwig Salvator published dozens of books, all based on his research findings. Then, however, he discovered more and more his gift for writing per se, even without being in the service of science. Finally, just before his death, he wrote two books in which his poetic gift was combined with his passion for positivist science. In 1915, after the beginning of the First World War had driven him from Majorca to the Czech Republic, Ludwig Salvator published a Friulian-Italian-German, trilingual version of his book Zärtlichkeits-Ausdrückeund Koseworte in der friulanischen Sprache. What a poetic, tender and silent protest of a declared pacifist against the folly of an incipient world war. Before that, still written and published in 1914: Songs of the Trees. Winter dreams in my garden in Ramleh. And for the project "NIXE" of musikprotokoll 2015, exactly on the centenary of the death of Archduke Ludwig Salvator, it is the book of inspiration for the project. In a passionate life "on the sea", traveling with his research steam yacht Nixe from one place to the next, always the observation antennas extended, Ludwig Salvator takes a rest from science, so to speak, in a small estate in northern Egypt near Alexandria. But only to keep his observing antennas extended. And that is why he does not create a scientific book, but a booklet of poetry about the eavesdropped sound of the trees, the sounds of different tree tops, the sounds of the wind and the birds.

The precise sensory perception is transferred into the sensual precision of description. A scientific approach thus becomes the starting point for art. This is what the life and work of E. L. Salvator stands for - ancestor, instigator and stimulus for a sound art exhibition at ORF musikprotokoll in steirischer herbst 2015.

But Ulysses notwithstanding: as early as 1905, a purely illustrated book about Ulysses' "home" appeared, the book Sommertageauf Ithaka (Summer Days on Ithaca), also born from this overlap of scientific observation and representational accuracy. Almost a hundred woodcut plates after drawings by Ludwig Salvator document bays and mountains, heights and caves. In the preface, however, acoustic observation is not neglected: "The cicadas chirped, and as one approached the island, a cicada voice seemed to sound from every tree, from every bush, from every rock, a giant hymn, as it were, that one sang to the warmth, to summer. [...] To all corners and ends I wandered the island by sea and by land, sailed around its capes, where the breeze in the noon hours creates cheerfully rumbling waves, listened to the murmur of its sea caves [...]"

He would thus have the makings of an icon of free science and its art, beyond Academia and at the same time full of passionate precision: born in 1847, Archduke Ludwig Salvator devoted a lifetime to natural science and ethnography instead of diplomacy or the military at the Viennese court. He meticulously documented flora and fauna, customs and traditions, and published dozens of highly regarded specialist publications, including travel literature. For decades he travels with his steam sailing yacht Nixe. His research focuses on then little-known island groups of the Mediterranean, such as the Lipari Islands and the Balearic Islands. In 1869 he publishes the "Tabulae Ludovicianae", an extensive catalog of questions for the systematic recording of the explored. He is a member of many professional circles such as the "k.k.. Geographische Gesellschaft in Wien", the "Kaiserliche Akademie der Wissenschaften" or the "American Museum of Natural History New York". On Mallorca, on a purchased estate in the Tramuntana mountains, he realizes his ideas of lifestyle, nature conservation and species preservation. He leads a decidedly informal life and undertakes many projects incognito. On October 12, 1915 - exactly one hundred years before this year's musikprotokoll - Archduke Ludwig Salvator died. We therefore want to pay homage to this visionary and lateral spirit in the form of some artistic interventions.

As the art festival of a broadcasting company whose essential tasks include the transmission of interesting news from all over the world, we have chosen the classic correspondent's booth as both an instrument and a presentation venue. For ten days, artists will "play" in 14 correspondents' booths, acting as the place for which the artistic intervention is produced and where it is also received.

At the location of the installed correspondents' cabins, one can thus always perceive only one "sound track" or acoustic intervention in the respective cabin. All audio tracks, however, find their way to the Murinsel in Graz, which - as the only place in the center of Graz situated in the middle of water and strangely undecided between island and ship - is reinterpreted as the "Nixe", the favorite place and at the same time necessary instrument for Ludwig Salvador's research journeys.

And this ship, the "Nixe", will be sonically washed around by the sound works of the NIXE artists for ten days in wind and weather, in sun and rain. Randomly selected fragments of the 14 sound works will pass the Murinsel ship one after the other, audible from horn loudspeaker prototypes of the company Lambda, each sound art piece a swaying soundscape following the current.

The Joanneum courtyard, the Lesliehof with its fourteen correspondent cabins, is thus our "harbor", the Murinsel our "ship".

The ship and harbor of the musikprotokoll project "NIXE" will be opened by Federal President Dr. Heinz Fischer on October 8, 2015 at 5:00 pm. On the Mura Island, a short concert by Mazen Kerbaj and Franz Hautzinger will be followed by a veritable ship christening of the temporary "Nixe" by Federal President Dr. Heinz Fischer, followed by the opening of the fourteen correspondents' cabins in the courtyard of the Joanneum.