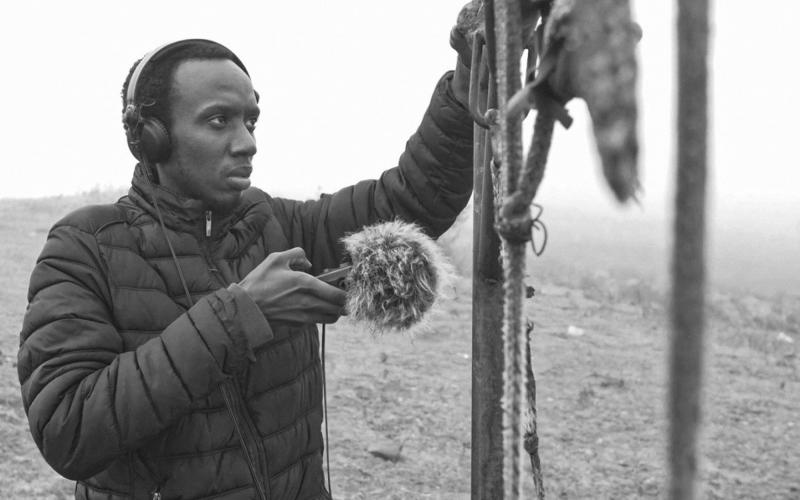 A protrait of SHAPE artist KMRU who will perform at musikprotokoll.

This week ORF musikprotokoll presents its 2021 festival programme at steirischer herbst, and this time we have once again invited several musicians who will be taking part in Shape this year. Shape is the platform for exciting new music and audiovisual art of the festival network ICAS of the International Cities of Advanced Sound, which was founded at the end of 2014 by ORF musikprotokoll and fifteen other European festivals. Every year, we jointly nominate 48 artists or art formations, who are then the focus of our spotlight for twelve months.

Getting to know each other at the Nyege Nyege Festival 2018

Among our many activities is an annual Shape Showcase at a friendly festival outside the European Union. In 2018, this took us to our ICAS partner in Jinja, Uganda, to the Nyege Nyege Festival. There we got to know KMRU, whose so finely spun music immediately caught our attention. In the meantime, the musician, who originally comes from Nairobi, is considered one of the most exciting representatives of the East African electronic scene. Last July, his album "Peel" was released on the renowned Editions Mego label, and since last autumn, KMRU has been doing his Master's degree in "Sound Studies and Sonic Arts" at the Berlin University of the Arts.

Music as unpredictable as life itself

KMRU mainly uses field recordings as his musical source material, along with synthesizers and other electronic instruments, which he sometimes switches in such a way that they surprise him with supposedly erroneous sounds. Asked about his compositional method, the artist describes how much he likes to improvise, letting himself be guided by his intuition and the magic of the moment. His music should be as unpredictable as life itself.

"It's like life, so much happens at the same time and everything is in a constant state of change. There is no grid according to which, for example, the ambulance will drive by at exactly 3:45 or something like that," KMRU elaborates. "Rather, life is a constant interplay of coincidences. That's why in 2019 I stopped working with a metronome, with a fixed time structure. I want my music to develop naturally. I try not to think too much about the result when composing, so as not to be blocked by ideas. I want to be as free as possible. Yes, my music should be as unpredictable as life itself, like the wind or a tree.
In the twilight

At first, KMRU's music radiates an often homely, sometimes almost sweetly dreamy atmosphere, but soon an undercurrent of simmering tension creeps in until you suddenly think you are standing in the middle of a twilight or in a fog in which everything seems to dissolve into nothing.

"As a rule, I try to create a state in which you don't really know what you're supposed to feel and whether you've just really heard this sound," he says. "With "Peel" I managed to do that the best. I also discover new details every time I listen to it. Yes, you are supposed to find yourself in an in-between space when listening to my music."

In addition to his own artistic activities, KMRU is also very committed to his colleagues, presenting their music in radio programmes or passing on his knowledge in workshops. For example, he founded an Ableton User Group in Nairobi and was involved in setting up the Black Artist Database (formerly "Black Bandcamp") - you can hear more about it next Sunday in Zeit-Ton extended.

(Shape is funded by the European Union's Creative Europe programme).