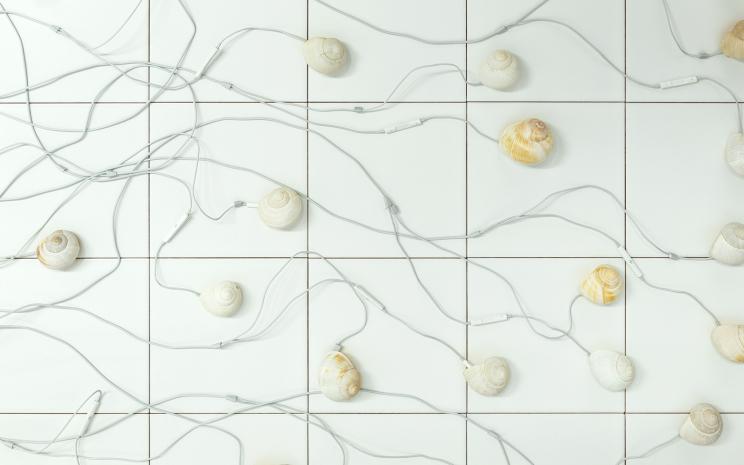 Eighteen pairs of earbuds and thirty-six snail shells are the central objects in the sound installation Echo, created by Romanian-born artist Nona Inescu. The earbuds are connected to an audio player and lead into the snail shells.

The analogy between the human ear and a seashell was first formulated by a 16th-century anatomist. Alfonso Corti later named the spiral-shaped cavity of the inner ear cochlea, the Latin word for snail. The history that connects seashells with sound is filled with symbolism and popular scientific beliefs: shells reflect the inner sounds of the human body or contain echoes of the world.

Both snail shells and headphones signify a personal space in which we can feel safe and comfortable by ourselves. The outside world, once a shared auditory environment, is effectively broken by “endless” white headphones, while the snail shells serve as resonating chambers for individually localized bubbles of self-programmed sounds.

In cooperation with SHAPE – Sound, Heterogeneous Art and Performance in Europe. Supported by the Creative Europe program of the European Union. Nona Inescu is a SHAPE Artist 2021.